It is a fact! The two industries that continue to outperform under the current economic times are IT & Healthcare services. Electronic Medical Billing combines them both! With ClaimTek, the setup fee is low and you’ll have a business of your own that allows you to be the boss, set your own hours, set your own schedule, and earn as much as you want and need while keeping overhead costs to a minimum.

Doctors are in desperate need of accurate claims processing to restore their cash flow. What’s more, they are willing to pay well for it! In fact, they’re happy to pay for it!! As an electronic medical billing professional, you will be in high demand. It doesn’t take long for good claims processors to have more business than they can handle through doctor referrals alone. 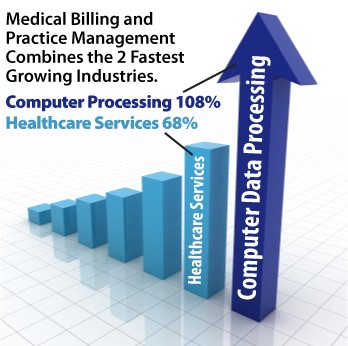 Let’s explain why medical billing is a booming business, with loads of opportunity and rewards if you work hard and learn the industry. ClaimTek provides you with the vital elements to get started in this business on the right track: Advanced Software, Personal Training, Effective Marketing and Ongoing Support.

Some of the benefits of starting a medical billing business:

Here’s why the medical billing industry offers a great opportunity to those who are willing to study and learn the operation of this business:

Most doctors’ offices cannot keep up with the record-keeping and constant change of regulations and fee schedules. Eventually, many of them decide to outsource their claims to a specialized billing service like yours.

Our system provides full revenue cycle management automation to consistently maximize reimbursements for doctors, taking human error out of the equation. This allows for maximization of reimbursements every time.

If you like to deal with professional clientele like healthcare providers and enjoy solving problems, you can build a rewarding business in medical billing like no other! ClaimTek has the right building-blocks for you like no other company does. The fees to get started are relatively low and your income potential is high. The flexibility and stability that this business can bring to your life are priceless!

You hear the word “transparency” get thrown around a lot when you are talking about business transactions, but Veterans Own Franchises not only throws the word around, it is the basis of who we are. Clear cut, detailed information from all parties can ensure that the buying/selling transaction is satisfactory to everyone involved. It is the easier way to do business. We offer a central location where you can do your research whether you are a buyer or a seller to find out more about: